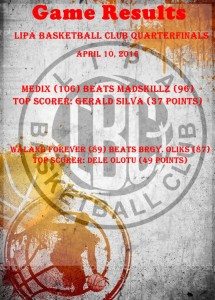 Medix won their game against Madskillz during the eliminations and they’re looking to sweep Madskillz for the season. It looked like they’re going to have an easy time doing just that as they were up by 30 points early as the 6’4 Harry Habit was unstoppable in the paint with sniper Gerald Silva providing the outside conversions.

Things changed when Madskillz top scorer Chok Adorna started hitting his shots with the rest of Madskillz clamping up on defense to get some easy fastbreak points. In what seemed like a blink of an eye, the lead went down to as low as 3 points.

Medix recovered just in time to prevent a monumental collapse as they went on to beat Madskillz, 106-96.

If you haven’t been following the league, it may seem like an easy game for Brgy. Oliks based on the rankings. However, Walang Forever actually beat Brgy. Oliks in the last game of the eliminations. But still, league experts were saying that Brgy. Oliks has the upperhand because of their solid showing in the whole tournament. This is especially true since only 5 players showed up for Walang Forever.

It looked like an easy game for Brgy. Oliks as they scored in bunches during the first quarter with team captain/manager Anton Oliquino providing 8 first quarter points built on 2 booming 3 pointers. Walang Forever gunner Christopher Sombrano went toe to toe against him with 10 first quarter points of his own to keep the game within reach.

Unfortunately for Brgy. Oliks, they had no answer for the determined Dele Olotu who was unstoppable in the paint. Dele Olotu carried the team on his shoulders as he huffed and puffed his way for 40 minutes, even making the crucial free throws when it mattered.

The Walang Forever Fab Five delivered the points with Roniel Pasahol and Xander Decella backing Olotu and C. Sombrano in the scoring department. However, it was point guard Dennis Sombrano who stole the show. With the game tied at 87 points after a conversion of Mark Naguit of Brgy. Oliks, D. Sombrano broke away for a fast break lay-up for his only shot/conversion in the game that proved to be the game-winning points. Final score was 89 to 87 for Walang Forever. 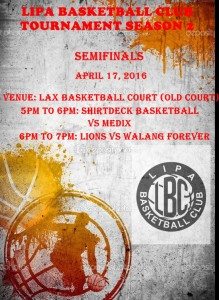 Shirtdeck Basketball was one of the surprises of the tournament as they finished 2nd in the standings after the eliminations. They beat Medix during the eliminations thanks to their outstanding guard play anchored on the crossover machine, Arjay Tolentino and their mobile big man, Joel Buena.

Team Medix had attendance issues early in the tournament but they’re now complete, making them a scary opposition for Shirtdeck Basketball. It will be a contrast of strengths and weaknesses so it will be interesting to see which team will come up on top.

Lions beat Walang Forever during the regular season, but only by a point. Walang Forever has shown that they can upset strong teams so the Lions won’t be taking this game easy.

The Lions team is bannered by their one-two punch, Navin Magnaye and Gibet Julian. They boast of one of the deepest lineups in the tournament, with role players more than happy to do provide help to get their league-leading 11 wins in the eliminations.

The Walang Forever team will look on to build their morale-boosting quarterfinals win against Brgy. Oliks. They continue to be dangerous with Dele Olotu and Dino Cobarrubias leading the way.

Heartbroken No More: Walang Forever Barges into the Finals by Playing Heartbreakers to League-Leading Lions