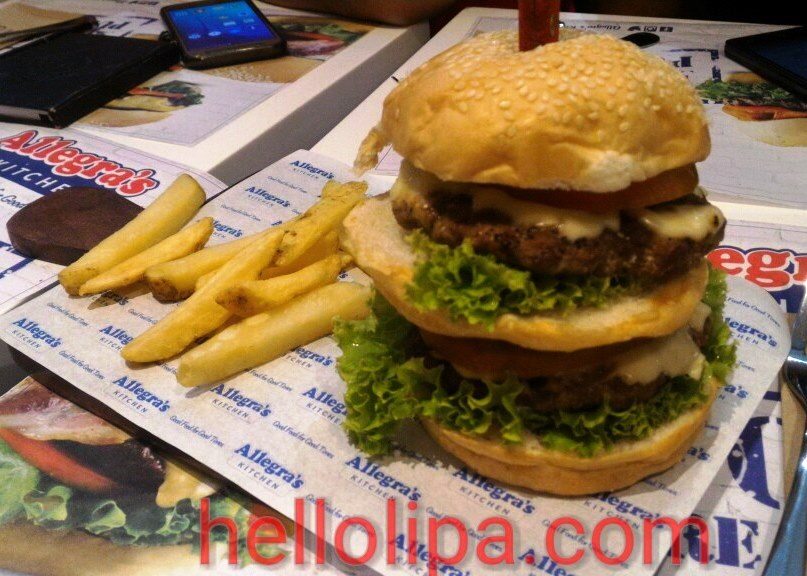 Allegra’s Kitchen is one of the well-loved restaurants of our brothers and sisters in the nearby city of Sto. Tomas. Located at the The LifeStyle Strip at the Maharlika Highway in the said city, a lot of Lipeños regularly make the trip to Sto. Tomas just so they can try what the kitchen of Allegra’s Kitchen has to offer.

Well, Allegra’s Kitchen just brought their kitchen to our wonderful city of Lipa, and they’re bringing good food along with them.

The Opening of Allegra’s Kitchen in SM City Lipa

Allegra’s Kitchen formally opened their Lipa City branch at SM City Lipa last March 18, 2016, and they did so with aplomb as they offered free cheeseburgers to the first 100 customers. As one would expect, the line was long and filled with people who couldn’t wait to grab a bite of the cheeseburger that they love or try it and see what the hype is all about.

Free Cheeseburgers for the First 100 Customers!

The Hello Lipa team was invited to cover the event and try their burgers. During the opening, only the burgers are available, and we were more than happy to try their beloved burgers.

Here are their burger offerings: 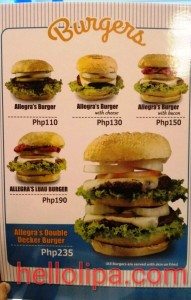 Of course, it didn’t take me long to decide to go for their biggest burger – Allegra’s Double Decker Burger. 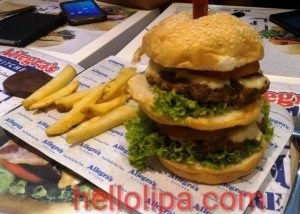 Believe me. It’s huge. This is a massive burger that’s thankfully served with a knife through it because there’s no possible way to eat it like how you’d eat a normal burger.

It has two burger patties and two slices of cheese. It also comes with lettuce, onions and tomatoes. Somehow, they were able to pack the ingredients in a hamburger bun with an extra slice of bun in between the two patties just because they can.

My wife ordered the Allegra’s Burger with Cheese. It’s basically the kid of the Allegra’s Double Decker Burger, but it’s still of good size. At Php 130, it also comes with skin-on fries. 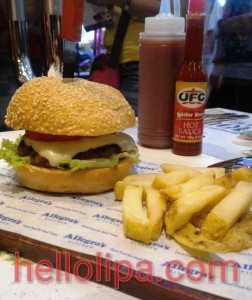 Our friend, The Pinoy House Husband, ordered the Allegra’s Luau Burger. At Php 190, you get the Allegra’s Burger with Cheese plus a topping of bacon and a slice of pineapple. I don’t know about you but the bacon itself justifies the extra Php 60, and the pineapple slice was a refreshing twist. 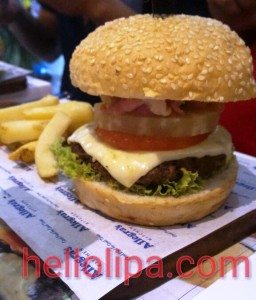 The burgers were pretty good – from the bun to the patties. The bun was soft and fresh. Speaking of fresh, the vegetables were fresh and crispy as well. Of course, you can’t have a good burger without a good patty, and the patty provided the juicy and tasty goodness.

Overall, we recommend the burgers of Allegra’s Kitchen. But seeing their other offerings that weren’t available during the opening, we made plans to return.

The Return Trip to Try their Other Offerings 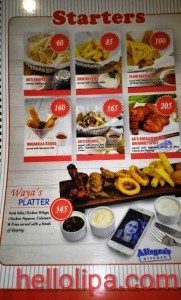 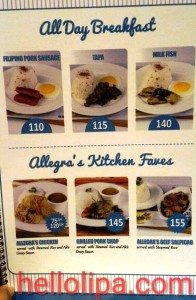 All Day Breakfast and Kitchen Faves

My wife and I together with our 4 year old daughter returned to Allegra’s Kitchen today, March 22, 2016, to have our lunch there. My wife had her eyes on the beef salpicao as early as the opening, and I’m a huge tapsilog fan and make it a point to always try the different tapsilogs. Our daughter loves crispy fried chicken so that’s what we ordered for her. 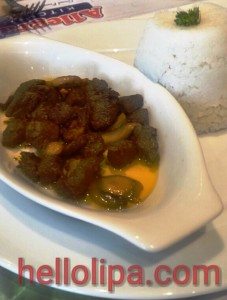 The Allegra’s Beef Salpicao was the first one to arrive. It’s priced at Php 155 which is fair enough considering that the serving size was good and it comes with rice. You can really taste the garlic and the butter with every bite and the beef itself was tender. 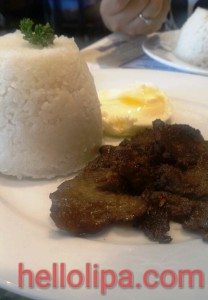 Next to arrive was my Allegra’s Tapa. It’s priced at Php 115 and comes with fried rice and egg. Note that I requested that they replace the fried rice with steamed rice so that explains why my tapsilog has no “si”.

The tapa has a perfect mixture of sweet and sour with a little tinge of saltiness. It’s also tender to the bite which is surprising considering that it looked crispy. It tasted perfect that I didn’t even need to dip it in vinegar. 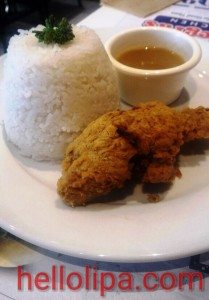 Our daughter enjoyed her fried chicken as well. She even declared that it’s her new favorite fried chicken. If you have a kid, you can check out their kids’ menu. 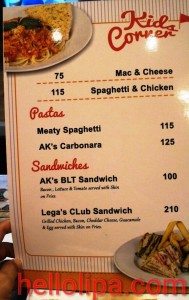 My wife and daughter also ordered Bueno Ala Ferrero for dessert. It was gone in seconds so that gives you an idea how good it was. 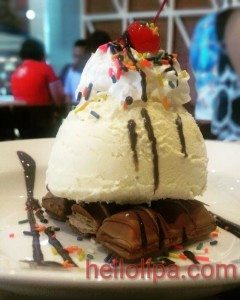 Here are their other dessert options. 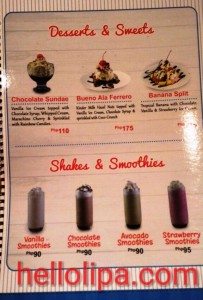 We recommend that you try it out. They serve pretty good burgers and rice dishes. The service is pretty good considering that they’ve only opened last week. Allegra’s Kitchen is good for groups of friends or families. Heck, it’s even a good place to eat at even if you’re alone. 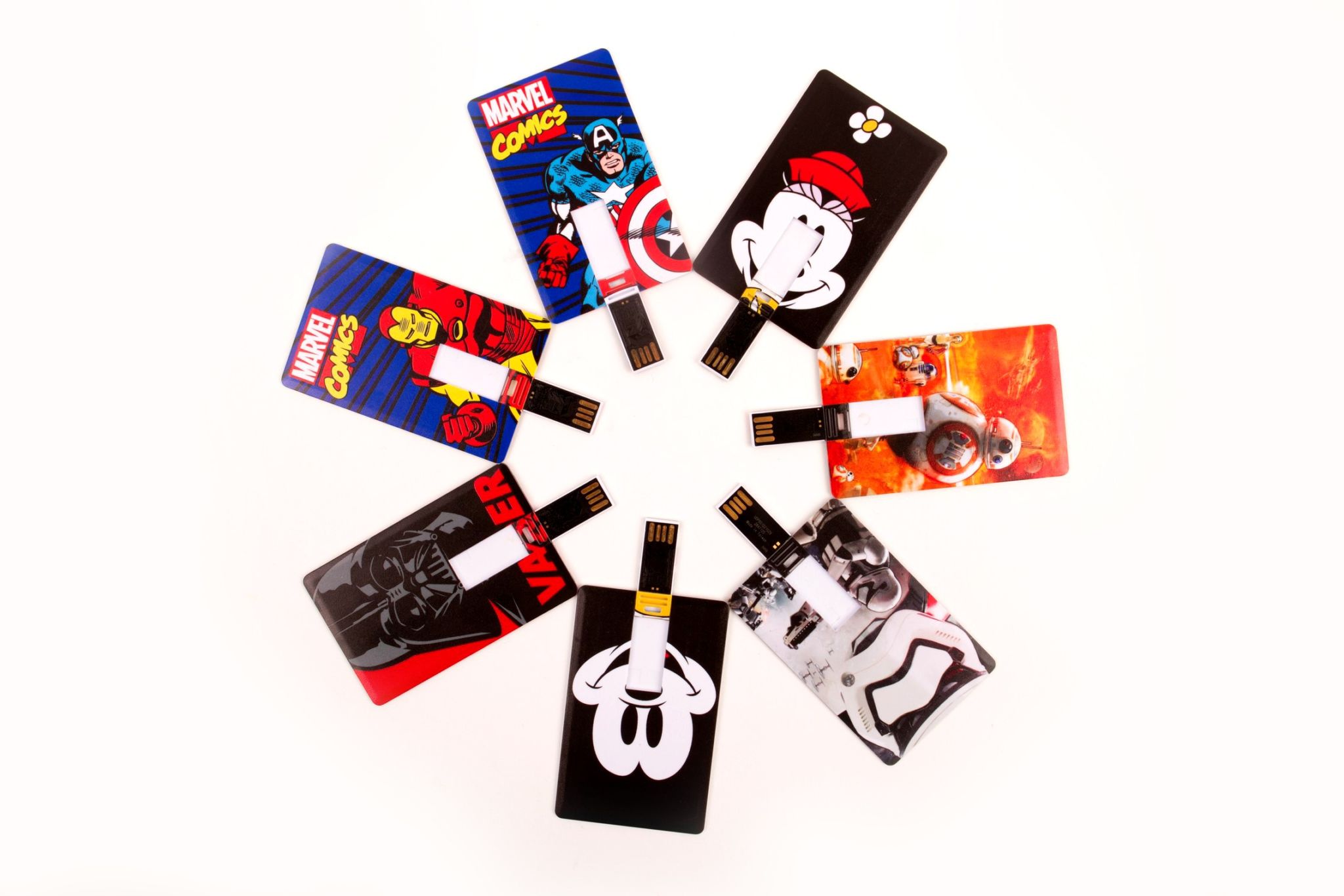 Techie Meets Trad: Back to School with SM Accessories 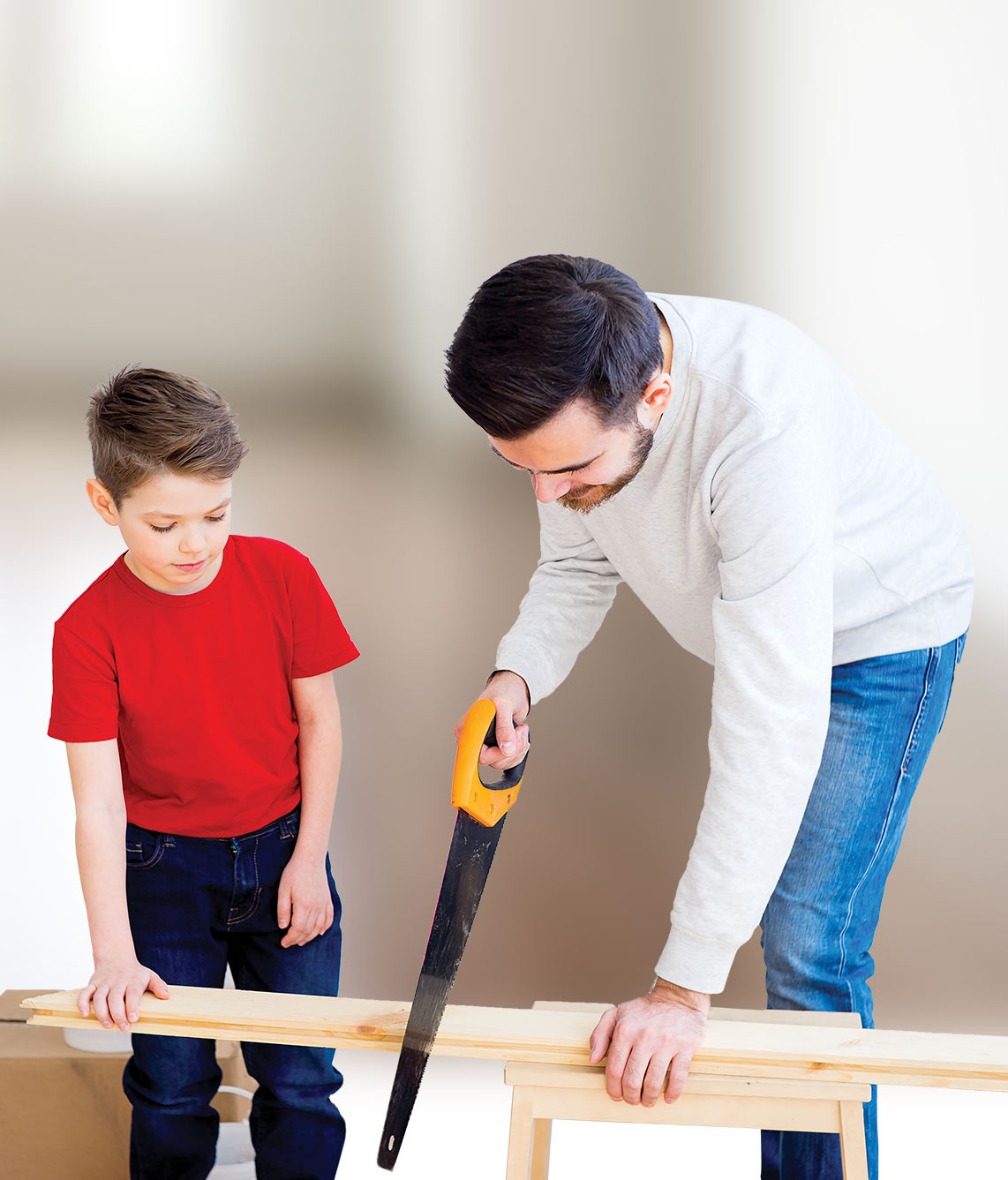 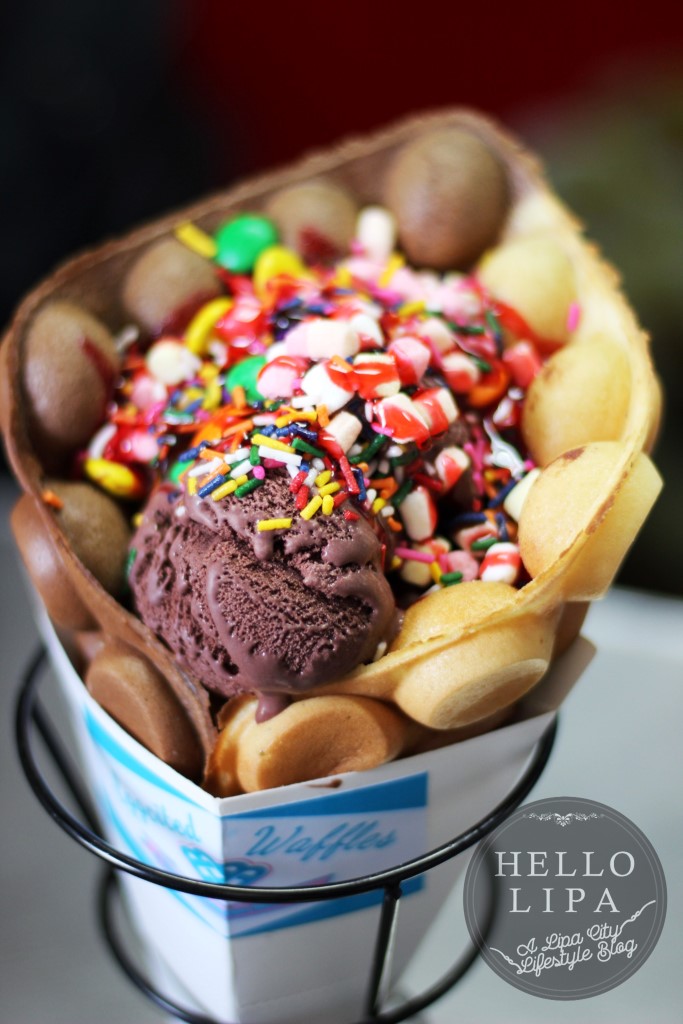 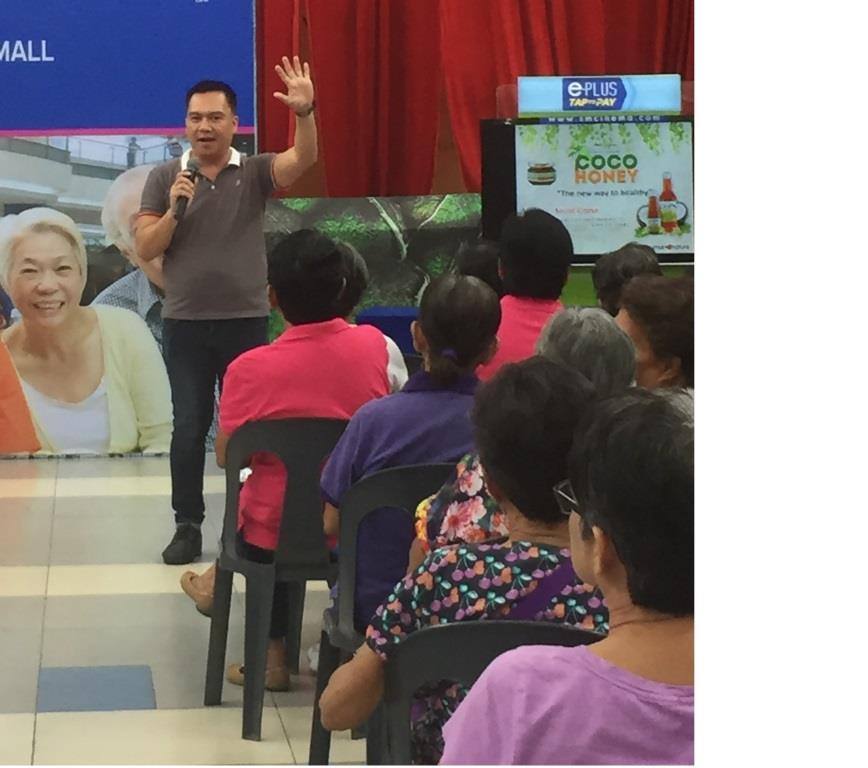